Your browser is out-of-date.

We no longer support this browser version.

For a better experience, keep your browser up to date. Check here for latest versions.

Herb Strongeagle, of Pasqua First Nation, was raised by his grandparents before entering Residential School at Lebret, Saskatchewan at the age of five.

His grandfather was a medicine man and his grandmother a well-respected midwife. There were daily prayers and offerings with a peace pipe and sweetgrass, sweats and powwow dancing. His grandfather was a spiritual person, as people from other reserves would come to see him for healing and prayers and he would go to other reserves to provide care. His annual rain dances were well attended Herb obtained his Grade 12 diploma, followed by a Business College diploma, a Bachelor of Commerce Degree from the University of Ottawa, and a Life Insurance License from Insurance Councils of Saskatchewan. He was one of two appointed first Lay Benchers for the Law Society of Saskatchewan.

Herb’s first position with Co-op Oil Refineries and was followed by management and finance positions in Federal and Provincial Government Departments, on First Nation Reserves and with the Saskatchewan Indian Federated University College.

Sports have provided Herb with the discipline, self-confidence, character, and team-oriented skills that set the groundwork for successful relationships. At conferences, he encourages others to recognize their own gifts and talents. His personal mentors were his grandparents, teachers, friends and sport enthusiasts. He feels blessed.

Today, Herb is a Director of Many Nations Benefit Cooperative – which provides benefits of Group Life and Health Insurance and Pension funds to groups across Canada. He is on the AFN Indian Residential Schools Advisory Committee. Also, with his nephew Trent Blind, BA, BBA and CMA they established Aboriginal Financial Services Corp. AFSC. As a result, AFSC partnered with MacKay LLP Chartered Accountants to work with Aboriginal communities and businesses to provide economic development, business and marketing plans, accounting and audit, financial management, investment, taxation and other business-related services.

What/who has inspired you to give back to our Aboriginal community?

What inspired me to give back to the Aboriginal community are my grandparents' teachings as well as what I learned and experienced through school and university.

What do you see as the major challenge faced by the youth in our Aboriginal community today?

What the major challenge faced by the youth of today is education. They have to work hard to achieve success.

What do you see as the major reason for the success of our Aboriginal community over the past ten years?

The major success of our Aboriginal community over the past ten years is the experience and leadership we have in the communities.

What do you see as the major opportunity to enable the Aboriginal community to be more successful over the next five years?

The major opportunity to enable the Aboriginal community to be more successful over the next five years is the opportunity for skill training for employment.

What is your understanding of inter-nation trade and how do you see it benefiting the Aboriginal community?

My understanding of inter-nation trade is for First Nations to interact, form networks and exchange ideas for economic development in their communities.

What is your motivation to be a champion for the Aboriginal community?

My motivation to be a champion for the Aboriginal community is to demonstrate leadership and be an example of what we can achieve through hard work.

Two beacons for Aboriginals in sport…and in life 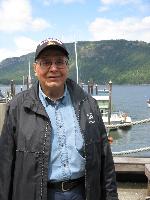 A member of the Pasqua First Nation, Herbert Strongeagle sits on the AFN Indian Residential Schools Survivor Advisory Committee. After winning the Longboat Medal, he continued to excel at sports and studied at Saskatoon Business College, earning a provincial championship with the Fort Qu’Appelle Sioux Indians hockey team in 1957. He also played baseball in the Saskatchewan Southern Baseball League in the early sixties. Still, his true love was hockey, and he parlayed his knowledge of the game by becoming a scout for the Regina Pats of the Western Hockey league for 12 years and for the Vancouver Canucks of the National Hockey League for 3 years.

Strongeagle’s business experience includes working for the oil industry and for the federal government, consulting on business and marketing plans. He was the first lay bencher to be appointed to the Law Society of Saskatchewan. Married and working full time, he returned to school to earn his bachelor of commerce degree at the University of Ottawa. He now sits on the Board of Directors of the Many Nations Financial Services Limited and remains dedicated to the success of First Nations youth in sport. Herb received the Lifetime Achievement Award from Saskatchewan First Nations in 2006.

Sacobie is a member of the Maliseet First Nation near Fredericton, N.B. Since the death of his 40-year-old father from a heart attack three years ago and after seeing his mother, sister and brother succumb to and overcome addictions, Josh has been giving messages of hope to youth everywhere—and especially to Aboriginal youth. “I’ve seen 90% of my friends take that wrong path…I feel lucky to go to post-secondary, to be able to play at the next level in football, to better educate myself.” He was the keynote speaker at last November’s National Child Day.